by Bjork on Jul 9, 2014 in Creating an Income, Growing Your Food Blog Three months ago I wrote a post called How to Increase Your Conversion Rates with A/B Testing. In the post I promised to put together quarterly updates to let everyone know how the A/B testing is going.

My hope with these quarterly updates is to:

You can take the things we’ve learned about increasing conversions and apply them to your sales pages without having to do any A/B testing on your own (but I still think you should do A/B testing if you have the time).

Results from the A/B Test

Let’s take a look at the results of the experiment (you can click on the image to see a larger version).

Conversion Rate, Compare to Original, and Probability of Outperforming Original

There are lots of data points that we can examine when using Google Analytics and Google Experiments, but in this post we’re going to focus on Conversion Rate, Compare to Original, and Probability of Outperforming Original. Conversion Rate shows us the percentage of people that decided to sign up for Food Blogger Pro after visiting the home page.

That’s a great question. Thanks for asking. 🙂

Once Google Experiments sees a trend with the A/B test it will automatically start sending the majority of the traffic to the higher converting page.

If you’re not a data nerd you can whisper “multi-armed bandit” out loud and then laugh at how funny it sounds. The Compare to Original number tells us how much better (or worse) the variation page is performing when compared to the original page.

Based on the data from this experiment we can expect to have 138% more sign ups for Food Blogger Pro with the variation page versus the original page. This number is kind of like Google Experiments saying “I’m this sure that the variation will do better than the original.”

The highest it can go is 100%. That’s Google Experiments saying that it’s really likely that the variation will outperform the original.

The lowest it can go is 0%. That’s Google Experiments saying there is no chance that the variation will outperform the original. One of the biggest changes that you’ll notice is the video background. This is a web design style that’s become popular because it can communicate in ways that static images cannot.

The first time I noticed a site using this type of design was in February when I went to login to PayPal.

I even tweeted about it (a rare occasion for me).

I wanted to test a similar design style for Food Blogger Pro but I knew the design and development would be pretty expensive. I did a little research and found a $12 theme on ThemeForest that was exactly what I was looking for. It’s called the Kane Theme. It’s probably the best money I’ve spent all year. Here’s the reality with the video background though:

I don’t think the video stuff is the reason why this page converted better than the original. It’s actually possible that the video has a negative impact on the conversion rate (because it takes so long to load the page). It’s impossible to know for sure without testing, but I wouldn’t be surprised.

It’s much more likely that the following elements are what positively impacted the conversion rate.

Attention Ratio is the ratio of interactive elements (links) to the number of campaign conversion goals (which is always one).

The attention ratio on the original page was 1:11. The attention ratio on the variation page was 1:2. Before the new home page I’d consistently get emails from people that said they were thinking about signing up for Food Blogger Pro but didn’t because they had a question about how the membership worked.

These were people that were ready to take the leap, but they had a little sliver of doubt that kept them from signing up.

The common questions section on the new page alleviates that doubt by providing clear and concise answers to the questions that people have before signing up. Any guesses as to what the most common question is?

Yep. You guessed it (or maybe you didn’t)…

Can I cancel anytime?

I don’t know about you, but I’ve definitely been burned by crummy contracts in the past (I’m looking at you, Comcast), and I’m guessing that lots of other people have as well.

That’s why we wanted to clearly communicate on the new home page that you can cancel anytime, no questions asked. Not only does this reduce the number of emails I need to answer, but it also helps to increase the conversion rate.

3. Proximity of testimonials to call to action

Can I take a moment to acknowledge how boring that sounds?

Ahk. Sorry about that.

It’s an important concept to understand despite how boring it sounds.

Here’s a personal story that explains why this is important:

About once a week I experience what I call “think and hover.” Do you know what I’m talking about it? It’s that moment of truth when you’re trying to decide whether or not to buy something. You hover over the buy button while thinking about whether you should click on the button or click the back arrow in your browser.

I experienced this phenomenon most recently when considering whether to sign up for a product called LeadPages. It was priced at $67. Super expensive for a recurring monthly fee, so it wasn’t an easy decision for me.

I had slowly made my way through the sign up process until I got to the dreaded billing info area. Do you see what they’re doing that’s really smart? I gave you a hint with the red box. 🙂

They’re placing testimonials right next to the billing info area.

It’s a great way to encourage people to continue to go through with the sign up process, reassuring them that they’re indeed making a good decision.

We applied this concept to the FBP home page: 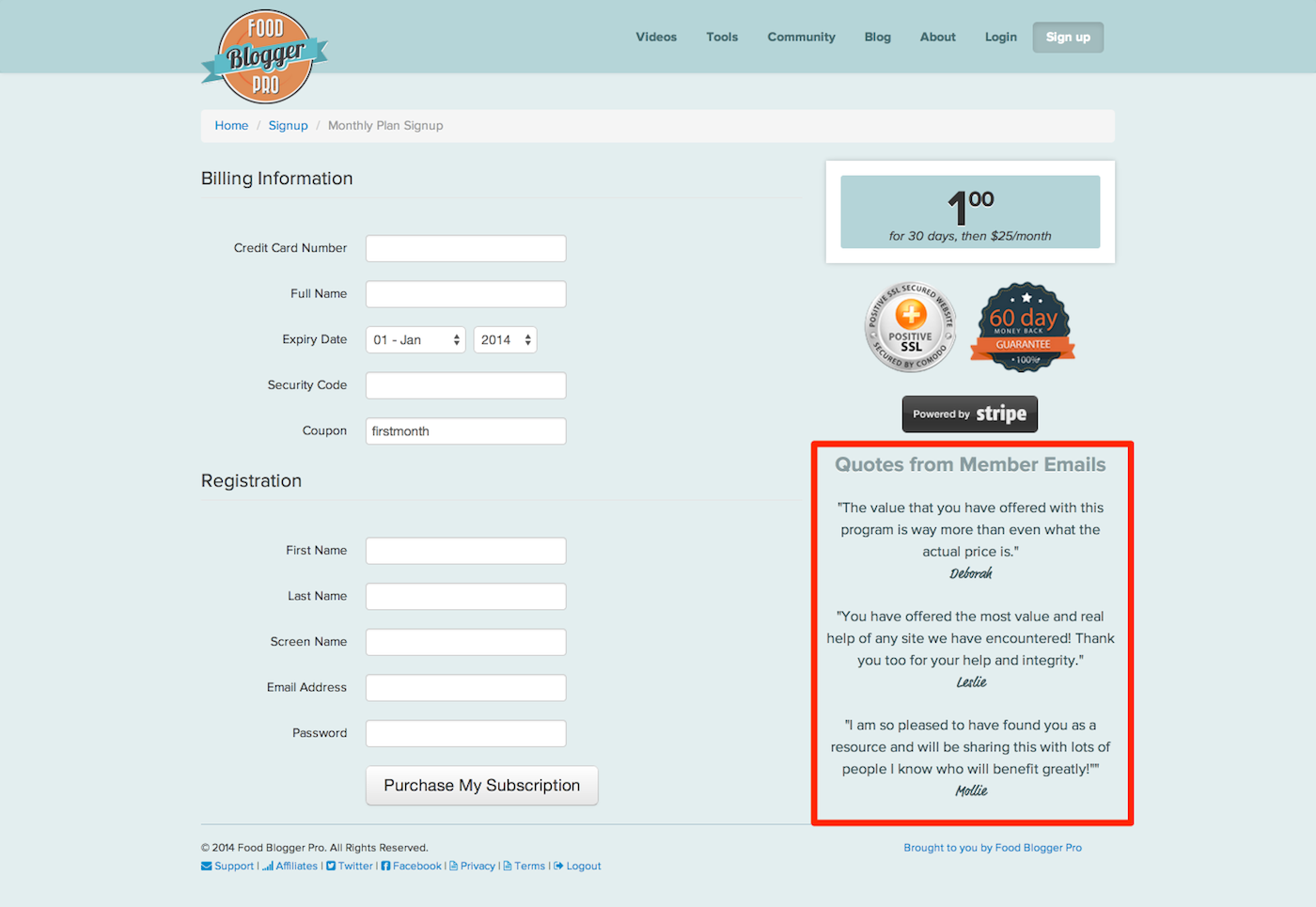 In general, people want to work with people, not faceless businesses. The previous home page did a poor job of communicating exactly who was behind Food Blogger Pro.

By adding the “Our (short) story” section we were able to personalize Food Blogger Pro a bit.

Do we love that picture? Nope. (I actually have sweaty armpits in it…thank goodness for dark shirts.)

Do we think having a photo of us will make the site more personal and therefore help people feel more comfortable about signing up for Food Blogger Pro? You bet.

But I thought you said the conversion rate went up?

Here’s why that can happen:

When we say that the conversion rate improved by 138% it means at the time we were testing the variation performed 138% better than the original.

The bad news? We didn’t get any closer to a 2% conversion rate. The good news? We had a successful A/B test where we improved the home page. We’ll use the things we learned to build a new variation and continue testing over, and over, and over…

Does this stuff make sense? Do you think you’ll ever end up doing an A/B test for a product you’re selling on your blog? Do you think it’s worth it? I’d love to hear your thoughts, questions, and comments below or over in the FBP Community Forum.